Shannon Cason is a writer and storyteller. He has told stories a lot of places. He co-hosts a storytelling show called Do Not Submit at Powell’s Bookstore. He also hosts a podcast called Homemade Stories on iTunes. He will be reading from his zine called Easier Said available for $5. Buy one. Shannon is originally from Detroit, he’s getting married soon, and has two gorgeous daughters.

Kelsie Huff is a storyteller and stand-up comedian. Kelsie is a senior cast member at Comedy Sportz 100 Proof Comedy. She is the producer of the kates, who will be performing right here at The Book Cellar Saturday, April 27th. She also teaches the only all female stand-up class is Chicago called Feminine Comique.

J.W. Basilo is a guy who never learned how to shut up. His often raucous stage act, a Vaudevillian mash-up of poetry, music, comedy and storytelling, has earned him a reputation as one of the more sought-after and compelling spoken word artists working today. Basilo is a National and World Poetry Slam finalist, a PushCart Prize Nominee, Executive Director of Chicago Slam Works, one half of Poetry/Comedy duo Beard Fight (with Dan Sully), and an Artist in Residence at Real Talk Avenue. When not on stage or banging his forehead on a keyboard, Basilo teaches writing and performance to brilliant youth and burned-out adults all over the country. All things considered, he’s doing pretty well for a guy who failed Creative Writing in high school. His artful jackassery can be found at his internet home, BustedMouth.com. 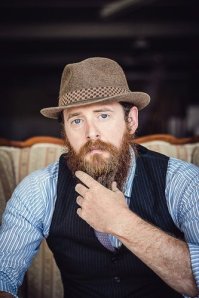 Erin Kahoa spends most his time marking things off his self made “Chicagoan” checklist, i.e. 23) Get doored on a bicycle or 57) Watch the Cubs lose. During the day he splits his time between the Route 66 Theatre Company and fretting over his ever approaching thesis deadline. The rest of the time he is an uncle, an amateur hat aficionado, and a proud member of Chicago’s Live Lit scene. You can catch Erin next week in the Moth Grand Slam, where he’ll proudly lose to Jim Padar.

Chelsea Rectanus studied English and creative writing at Northwestern University and now works at The Book Cellar. She can make you a sandwich or latte or something after she reads her essay if you’d like. This is her first reading at Essay Fiesta, but she’s been writing all her life.