Thirty-nine years after scientists detected the Wow Signal, we’ll be sending out some gnarly Wowie-wow-wow signals of our own. Come on down to The Book Cellar at 7pm on Monday, August 15th for this lineup of writers and performers who will produce the federally-mandated maximum amount of wows for a single evening of entertainment (and you can produce even more wows with cash donations to 826CHI):

Sarah Hollenbeck‘s personal essays have been nominated for a Pushcart Prize and received a Notable Mention in Best American Essays 2014. She has performed at Story Club, Tuesday Funk, Story Sessions, and The Bodies of Work Festival, among other live lit shows. As the new-ish co-owner of Women & Children First bookstore, she’s been featured in New City’s Lit50 and in Publisher’s Weekly Star Watch, which honors 40 young people who are making a difference in the U.S. publishing industry. This year, apart from otherwise smashing the patriarchy, she hopes to get back to working on a collection of essays documenting the experiences of women with visible and invisible disabilities.

Eileen Dougharty began writing sketch comedy when she moved to Chicago in 2009, but quickly found her real life adventures to be far more entertaining. She has performed with Story Sessions, You’re Being Ridiculous, and Miss Spoken and has contributed her writing to Reader’s Digest, WBEZ’s Pleasuretown podcast, and Consequence of Sound. She was also part of a recent TEDx talk about the power of storytelling and she’s tickled to make her first appearance at Essay Fiesta.

Nestor “the boss” Gomez was born in Guatemala and has lived in Chicago for the last twenty five years. He started telling stories less than two years ago. In that time he has won many storytelling contests–among them, the first ever Joyfest storytelling slam, as well as audience favorite for Here Chicago and Story Club. Nestor also holds the record for most Chicago the Moth Slam wins, has won two Moth Slams in Milwaukee, and is a two-time Moth Grand Slam champion. He is currently working on a solo show, a novel and a collection of poems. However, if you ask him he will tell you that his biggest accomplishment is making his mother proud and winning the heart of his girlfriend “Sweet Mel.” In case you weren’t paying attention to any of that you can find more information about Nestor at nestorgomezstoryteller.com.

Elijah Ruiz is a 19-year-old male who currently studies Sociology at Wright College. Although Elijah loves studying and reading about racial stratification and colonialism, he is no stranger to performance. He started acting in school plays his sophomore year of high school and then later joined Free Street Theater. Elijah has been a part of many productions ranging from Big Fish the musical, to the highly political Nerds, Sluts, Commies, and Jocks! Elijah has always been extremely interested in partaking in other art forms and he feels as though storytelling is the one for him. Elijah hopes to continue storytelling and acting, and is extremely excited to share a story for Essay Fiesta!

Deborah Siegel is the author of two books and one pair of boy/girl twins, creator of the Girl w/Pen blog, and founder of the public voice consultancy, Girl Meets Voice Inc. She’s also co-founder of She Writes, Senior Facilitator with The OpEd Project, a TEDx speaker, a Visiting Scholar in Gender Studies at Northwestern, an ex-New Yorker, and a lover of all things lake. Deborah is currently obsessed with a multimedia experiment in thinking out loud, and in community, about gender and early childhood. Check out the Pinterest board Tots in Genderland and learn more about Deborah’s writing, speaking, and coaching at deborahsiegelphd.com. 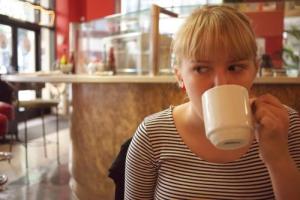 The product of nine years in San Francisco and eight years in St. Paul, SPECIAL GUEST CO-HOST Rosamund Lannin is pleasantly surprised to have lived in Chicago for over a decade. During that time, she has been an editor at Gapers Block, performed stories around the city, and consumed many carne asada burritos. These days she co-hosts lady live lit show Miss Spoken, edits Story Club Magazine, and tries to write essays that make you feel things, or at the very least laugh.