Treat yourself to a tariff-ic night of essays at a tariff-ic venue (The Book Cellar) on Monday, May 19th at 7pm. These writers are sure to give tariff-ic performances (this is the only tariff joke we can think of so we’re really getting our money’s worth out of it):

Dana Norris is the Editor-in-Chief of Story Club Magazine and the founder of the Story Club franchise. She produces and hosts Story Club North Side at Holiday Club in Chicago and teaches at StoryStudio Chicago.

Nathalie Lagerfeld is a writer from McLean, VA. By day, she pens artful descriptions of laser hair removal for an obscure local coupon company. By night, she does other stuff, like helping edit a secret food blog or reading all the most embarrassing parts of her sixth-grade diary at next month’s Mortified. 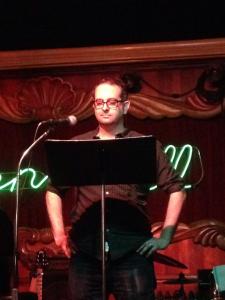 Jeremy Owens is the creator and producer of You’re Being Ridiculous, which has a new show coming up this Friday and next at Mary’s Attic (and features the lovely Dana Norris). He has told stories with Lifeline Theatre’s Filet of Solo Festival, Story Club, Guts & Glory, Story Sessions and The Paper Machete. He’s a food writer for Oy Chicago and Gapers Block and wants to be Whoopi Goldberg when he grows up.

Jill Howe lives, breathes, and would eat stories if possible. She organizes fellow writers in sharing their latest written work at her on-going workshop community, Friends with Words, while also co-producing Story Sessions, a monthly event with stories, music, and artwork at City Winery. The next installment of Story Sessions is on Wednesday, May 21st, and features Chicagoans telling true tales inspired by food on the theme DEVOUR. Jill has shared delightful discomfort and vulnerability at Mortified Chicago, Reading Under the Influence, Chicago Solo Theatre, Story Club Bridgeport and many more. This fall, Jill will also be coaching the new storytelling component of Fear Experiment at the Park West. Learn more about all things storyloving at www.storysessionschicago.com.

Jamie Black is an actor and writer here in Chicago. He is a graduate of the Second City writing program. His first solo show Living Inside Myself was produced by Bailiwick Repertory and played to audiences across the country. His current solo show It’s My Penis and I’ll Cry If I Want To has played at the New Orleans Fringe Festival, Atlanta Fringe Festival, Sideshow Fringe Festival in Nashville, TN as well as Filet Of Solo Festival, the Rhinoceros Festival and the Abbie Hoffman Died For Our Sins Festival here in Chicago. He can be seen on Youtube as The Bathtub Philosopher and as ½ of the improve duo Grannyprov.